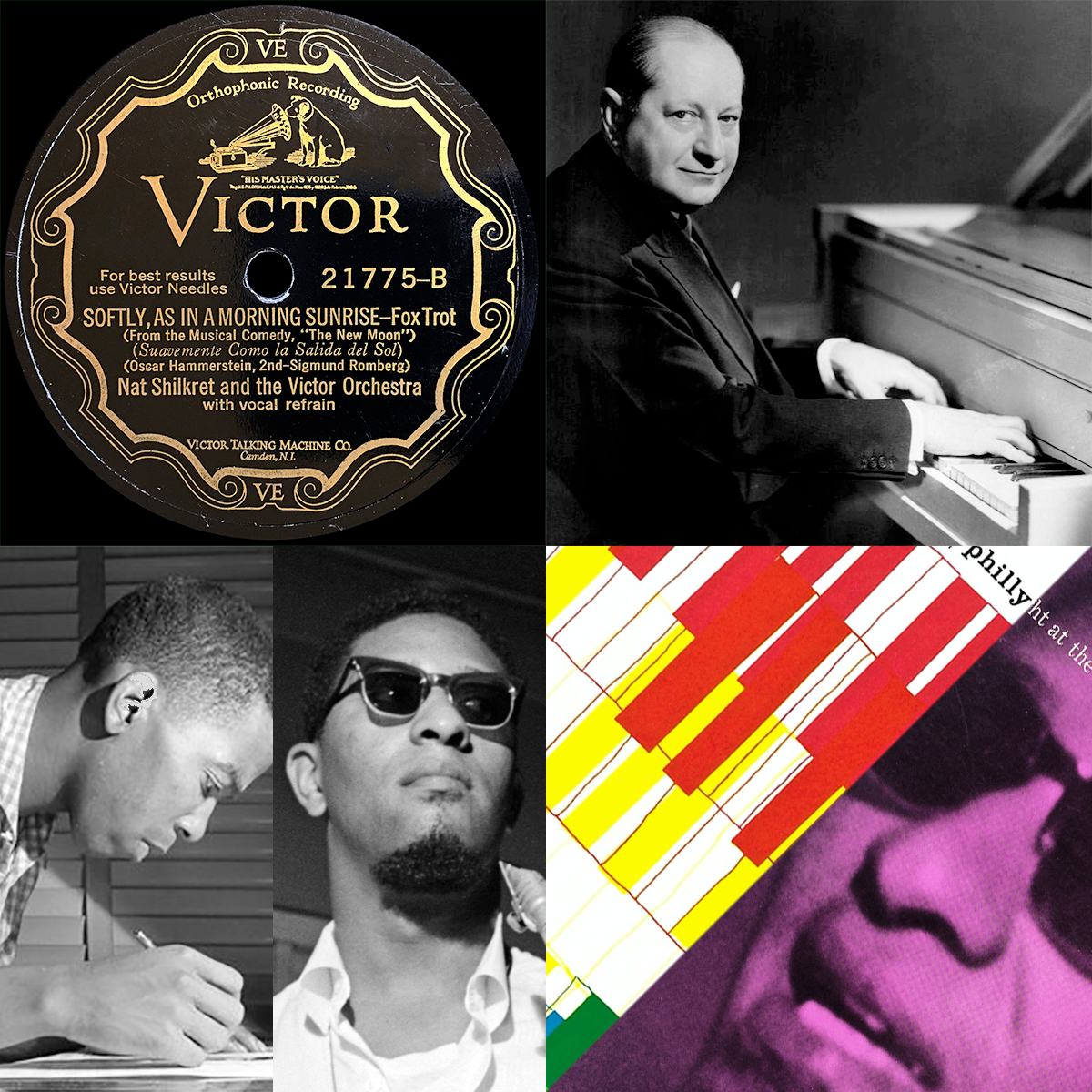 Nat Shilkret and the Victor Orchestra, “Softly, As in a Morning Sunrise” (Original 78)

Sonny Rollins, “Softly, As in a Morning Sunrise” (Original LP)

For the first installment of Origins of Bop, we looked at a 1948 bebop classic (Bird’s “Ah Leu Cha”) covered in the hard bop era (by Miles). This time, we explore a jazz standard with roots stretching back much further. “Softly, As in a Morning Sunrise” has been covered by many artists including John Coltrane and Larry Young, but here we focus on the interpretations of two Sonnys. Published in 1928 and written for a theatrical production titled The New Moon, the song’s music was composed by the great Sigmund Romberg with lyrics penned by Oscar Hammerstein II.

My personal history with this song is no different than most vocal jazz standards in that I had heard numerous instrumental renditions before ever knowing it had lyrics. I have always been a fan of popular music so the act of discovering the lyrics to one of my favorite standards has proven both a joy and a revelation. Several years ago, this passion for vocal versions led me to research the origins of my favorite hard bop tunes (it’s also a big reason why this series exists). These efforts culminated in two big Spotify playlists that I have since shared here on the blog.

Later on when I started collecting 78s, I had the idea to hunt down some of these older versions. There are usually numerous options to choose from for any given song, and while it’s possible that others might better suit my taste in this case, Nat Shilkret’s recording of “Softly” for Victor represents the first studio performance. It embodies the way most of the music-buying public would have first heard it in 1929 and thus brings along with it a unique authenticity.

Recordings like this are a bit paradoxical to me. On one hand, I value them because they enhance my appreciation of the instrumental versions I originally came to love. On the other hand, these Vaudevillian, string-drenched predecessors often sound undeniably square. In Ken Burns’ Jazz doc, the late, great critic Stanley Crouch gave historical context to the revolution Louis Armstrong created in singing when Crouch humorously demonstrated the difference between Satch’s fresh, entertaining lyricism and the insufferably corny vocal stylings that were commonplace in the early ‘20s. By 1929 that revolution was nearing completion, and to the dismay of a new generation of hep cats, bandleaders like Shilkret and the labels employing them desperately clung to a musical tradition that was becoming more and more obsolete by the minute.

Although The New Moon had lasting popularity as an operetta both on Broadway and the silver screen, “Softly” remained virtually untouched by the recording industry through the ‘30s, ‘40s, and into the early 1950s, save a swinging 1938 Artie Shaw version. It really wasn’t until the Modern Jazz Quartet picked it up and dusted it off in 1955 for a recording session with Prestige Records that the song was first brought to the attention of the jazz community. Two years later, Sonny Clark and Sonny Rollins gave the oldie their own respective readings for Blue Note Records, and countless other musicians would carry on the new tradition for decades to come.

The first version I ever heard was Rollins’, a cool performance appearing on the mega-classic live album A Night at the Village Vanguard. Elvin Jones picks up the brushes for this one, reduces the temperature of things to a simmer, and the trio proceeds to find a natural groove while trading short solos during an extended round of cooperative improvisation. Rollins slyly maneuvers the changes, darting then tip-toeing from one chord to the next like Peter Sellers playing a detective in hot pursuit of a suspect.

Sooner than later I discovered Blue Note 1579, Sonny Clark Trio, and when “Softly” played for the first time, I quickly recognized its highly memorable melody. Clark’s reading is the aural equivalent of gentle, natural light being emitted by an overcast day’s cloudy sky. From an engineering standpoint, a trio is undoubtedly easier to record than a larger arrangement like a quintet, and accordingly the sound of this group has plenty of room to reverberate in engineer Rudy Van Gelder’s home studio. Van Gelder’s piano treatment is typically much darker and perhaps even sounds a bit “squashed” at times. But here he takes the headroom afforded by this small band and gives the piano an extra dose of bounce that, though unusual for Van Gelder, is a very welcome change of pace. The tonal coloring is not too bright, not too dark, and the added dynamics make it easy for us to hear just how expressive Clark could be when his fingers struck the keys.

Simon Whiteside, co-host of the entertaining, educational jazz podcast 2-5-1, has provided Deep Groove Mono with his transcription of the intro and first chorus of “Softly” as played by Sonny Clark on Sonny Clark Trio. I have been a devout listener of Simon’s cast and it is highly recommended. There is not enough informed analysis in jazz record collecting and I always jump at the opportunity to educate myself more on this great art form. Have fun following along! 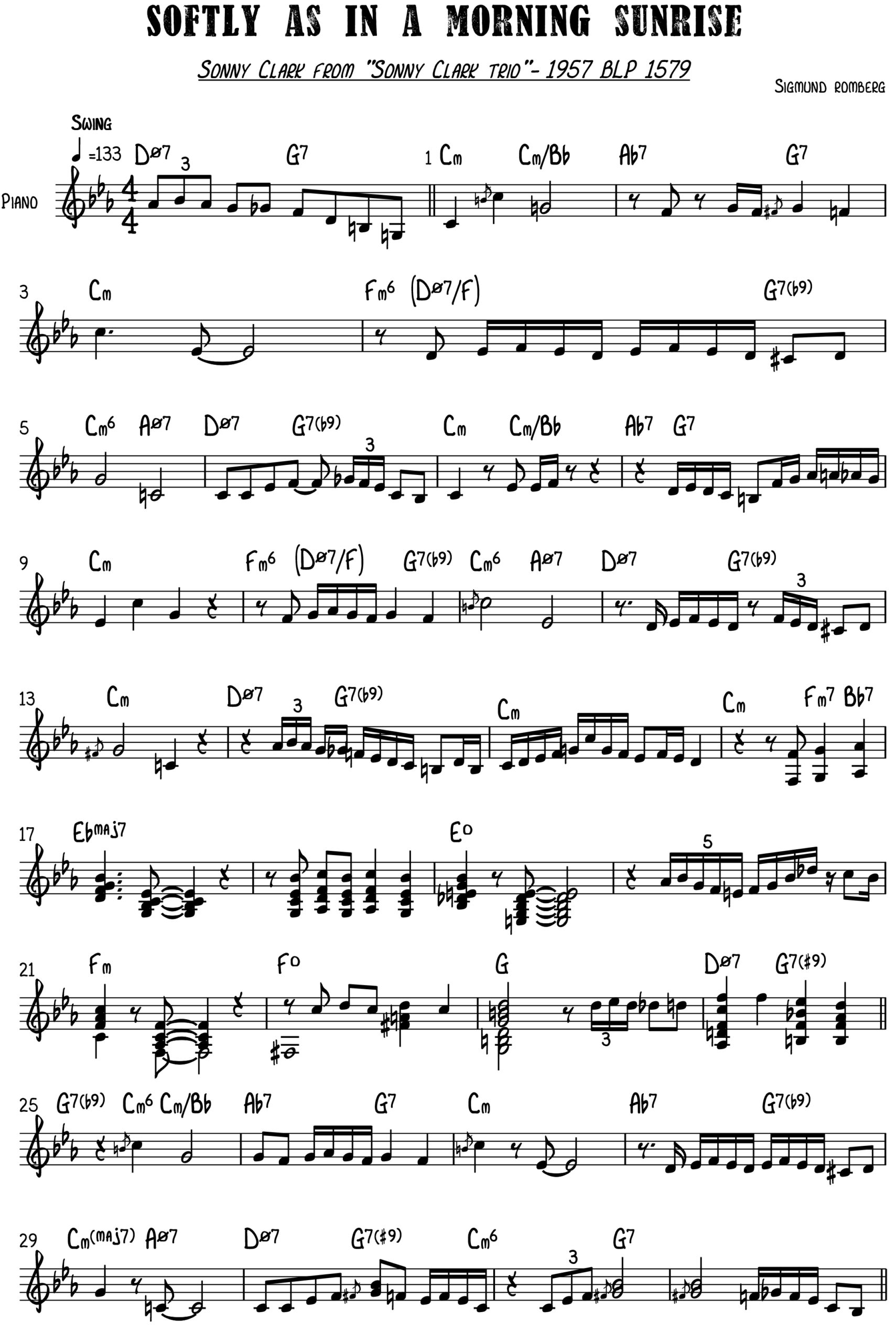 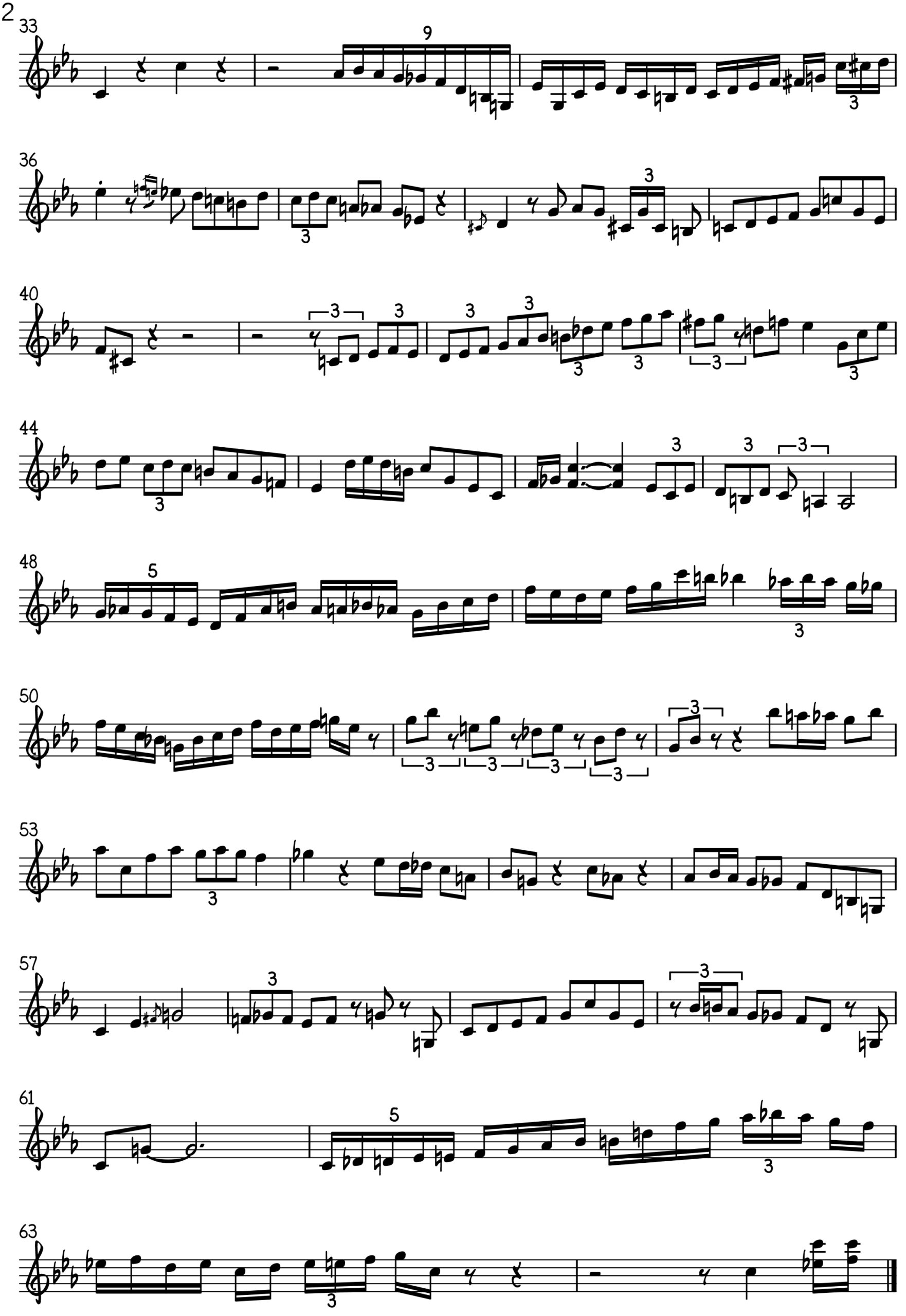